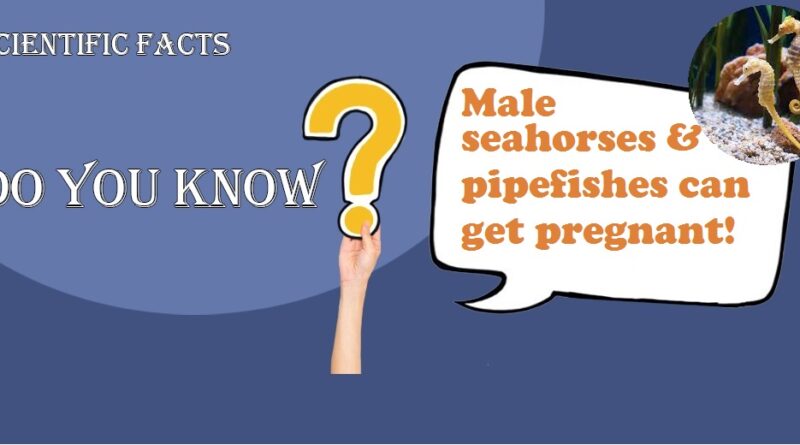 Male seahorses and pipefishes can become pregnant and give birth. As part of a project called MALEPREG, Dr. Olivia Roth from the Helmholtz Centre for Ocean Research Kiel (GEOMAR) in Germany is studying syngnathids, a fish family including seahorses, pipefish, and seadragons, to understand the evolution of pregnancy.

There are three different types of pregnancy in syngnathids. In initial forms, the eggs stick to the male body and then are carried. Another type includes a placenta-like system that transfers nutrients and oxygen with a pouch that closes with a skin fold upon egg deposition. And the third mode is similar to the second but with a closed pouch.

During a normal pregnancy, the mother is responsible for both egg development and pregnancy which could make it difficult to differentiate between happenings.

Comparison of closely related species of syngnathids, which display different forms, can let us understand the function of different genes involved in the evolution of male pregnancy.

Pregnancy of a non-self-embryo which half is from the father and half from the mother would reject by the body, principally. In mammalians, downregulation of certain immune system genes and specific adaptations in the placenta during pregnancy prevent the rejection of this non-self-tissue. Sequencing genomes of different syngnathid forms demonstrated that these immune system genes are lost or changed in them.

Transplantation of the syngnathids tissue to the belly of themselves and others showed those that have lost parts of their immune system are a lot better accepting of non-self tissues.

Comparing syngnathid pregnancy genes to the mammalian genes suggests these are genes from the very same pathways and similar genes have been co-opted in their function towards pregnancy.

Potentially, this has permitted the evolution of male pregnancy. The study of such a system might also be helpful in the examination of immunodeficiency diseases (such as HIV) treatments in humans. Some research also has focused on compensatory mechanisms for surviving and fighting against diseases in these fishes despite such deficiencies.

Global warming and it’s impacts on Pakistan, A world without ice

Science Outside the Lab: A Forgotten Aspect of Science to Boost Development